All Change At Earth’s Core 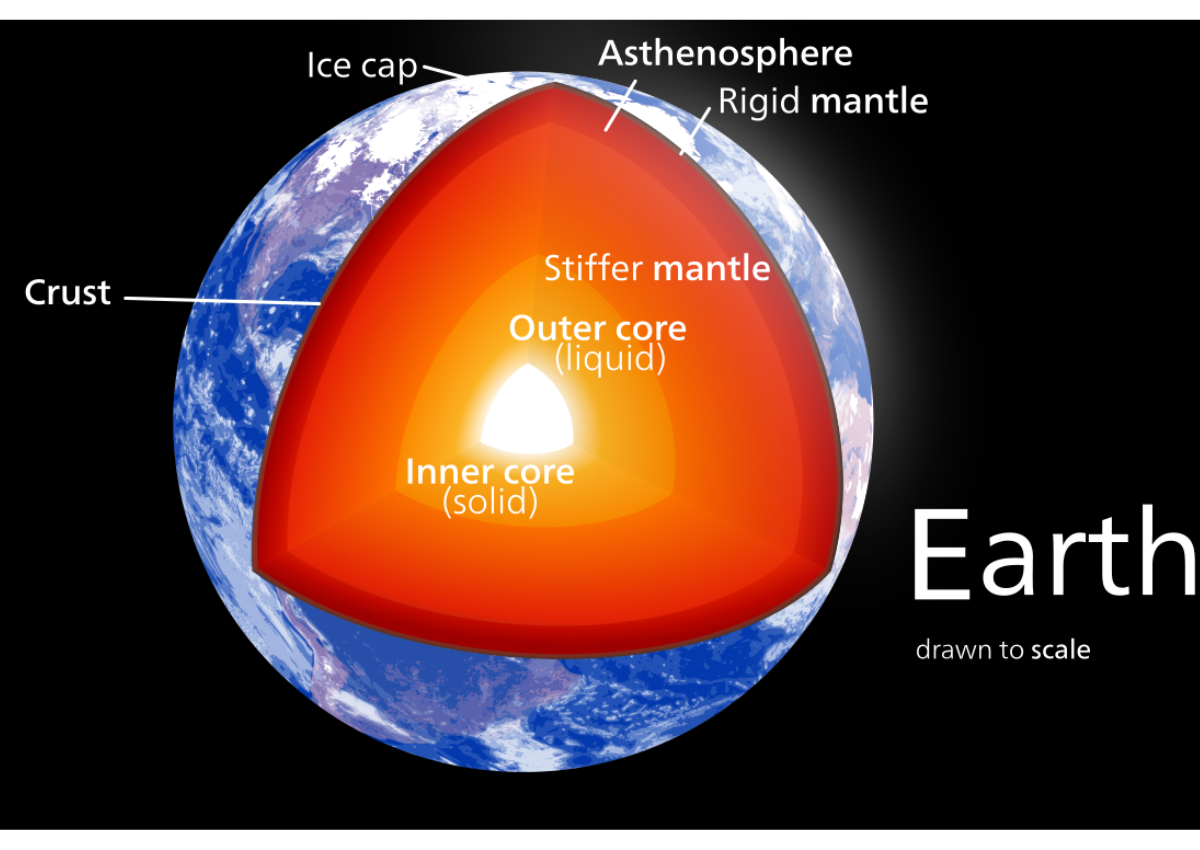 It is hard to know what is going on over 3000 km beneath our feet, but until recently scientists were fairly confident that they understood the way the iron atoms in the Earth’s core packed together. However, new research has overturned conventional thinking and revealed that the structure of the core is not as straightforward as was once thought.

Pressures and temperatures at the Earth’s core are stupendous – more than 3.5 Mbar and 7000K – and currently it is impossible to recreate these conditions in the laboratory. Our information about the core comes from observing the way that seismic waves travel through the core, extrapolating from experimental studies and studying iron rich meteorites.

As a result we know that the core is mostly iron, but that it also must contain some light impurities such as oxygen, silicon, sulphur, hydrogen and magnesium (because the density of the core is too low to be pure iron). The most significant impurity is thought to be nickel, which makes up between 5 and 15% of the composition.

Most studies on the Earth’s core have approximated the composition to be pure iron. “It was assumed that the alloy elements were not very important for the structural and elastic properties of the core,” says Igor Abrikosov, a theoretical physicist at Linkцping University in Sweden.

Experimental and theoretical studies on pure iron led to a ‘standard model’ for the core, which said that the iron atoms were packed in a ‘hexagonal close packed’ formation. This resembles a honeycomb structure in which the atoms are in densely packed layers of hexagons, with every other layer lying directly above its partner two layers below.

Other packing structures were ruled out because they were assumed to be less energetically efficient. “At moderate pressures other structures have some magnetism and they turn out to have lower stability,” explains Abrikosov.

Carrying out experiments at anything close to the pressures and temperatures experienced at the core is pretty much impossible. “To achieve high pressures the sample has to be made very small and then it is difficult to see the diffraction patterns from the structures,” explains Leonid Dubrovinsky, a geo-scientist at the University of Bayreuth in Germany. What is more, at high temperatures the iron tends to diffuse and react with the carbon in the diamond anvil cell – a device that pinches samples between two diamond points and creates extreme pressures.

An inability to recreate core conditions hampered our understanding of the core, but in recent years powerful computer models have stepped in the breach. “Expertise has been developed in ‘Ab intio’ (first principles) calculations and we are able to do higher quality extrapolations to understand core conditions,” says Abrikosov.

In addition experiments have improved greatly, with very high pressures and temperatures reached recently in new diamond anvil cells. Combined with the use of synchrotron radiation scientists have been able to observe structures at conditions that are ever closer to conditions at the Earth’s outer core.

Using this combination of theory, experiments and powerful simulations Abrikosov, Dubrovinsky and their colleagues have revisited the core. This time they have also included alloy elements such as Nickel and Magnesium in their calculations and, to their surprise, they found that it has a significant effect.

“At high pressures the magnetism is squeezed out of the other structures and they all have similar stability,” says Abrikosov, who presented his findings at the 1st EuroMinScI Conference near Nice, France in March this year. The new research has revealed that ‘face centred cubic’ and ‘body centred cubic’ structures can not be ruled out and that all of these structures are energetically possible. “The standard model has been killed,” says Abrikosov.

Elements like nickel, silicon, oxygen and magnesium are also likely to play a key part in way atoms pack in the core. Recent experiments have shown that at very high pressures magnesium atoms are compressed to such an extent that they can fit easily into iron structures. In addition the element nickel is more comfortable than iron in a ‘face centred cubic’ structure.

So why does this matter and what kind of difference could these structures make in the core” “It has implications for the anisotropy of the core,” says Dubrovinsky.

Studies of seismic waves have revealed that the waves travel faster in a north-south direction and slower in an east-west direction through the core – a phenomenon that scientists call anisotropic. The way the atoms pack in the core is vital for understanding this anisotropy.

What is more, the Earth’s core produces our magnetic field. Without it the Earth would be bombarded with dangerous cosmic rays and life would struggle to survive. As well as relying on Earth’s magnetic field to protect us, we now use it to navigate and keep satellites in place. Life on Earth depends upon the magnetic field, but until we understand the core we can’t fully understand how this field is created, or how it is likely to change.

For scientists studying the Earth’s core it is time to go back to the drawing board and rethink what lies underneath our feet. However, a new generation of powerful computer simulations, along with experiments that we could previously only dream about, mean that optimism is high and scientists are confident that the core will reveal its secrets soon.-European Science Foundation

Treasure Hunters vs. Archaeology: Saving History For The Public