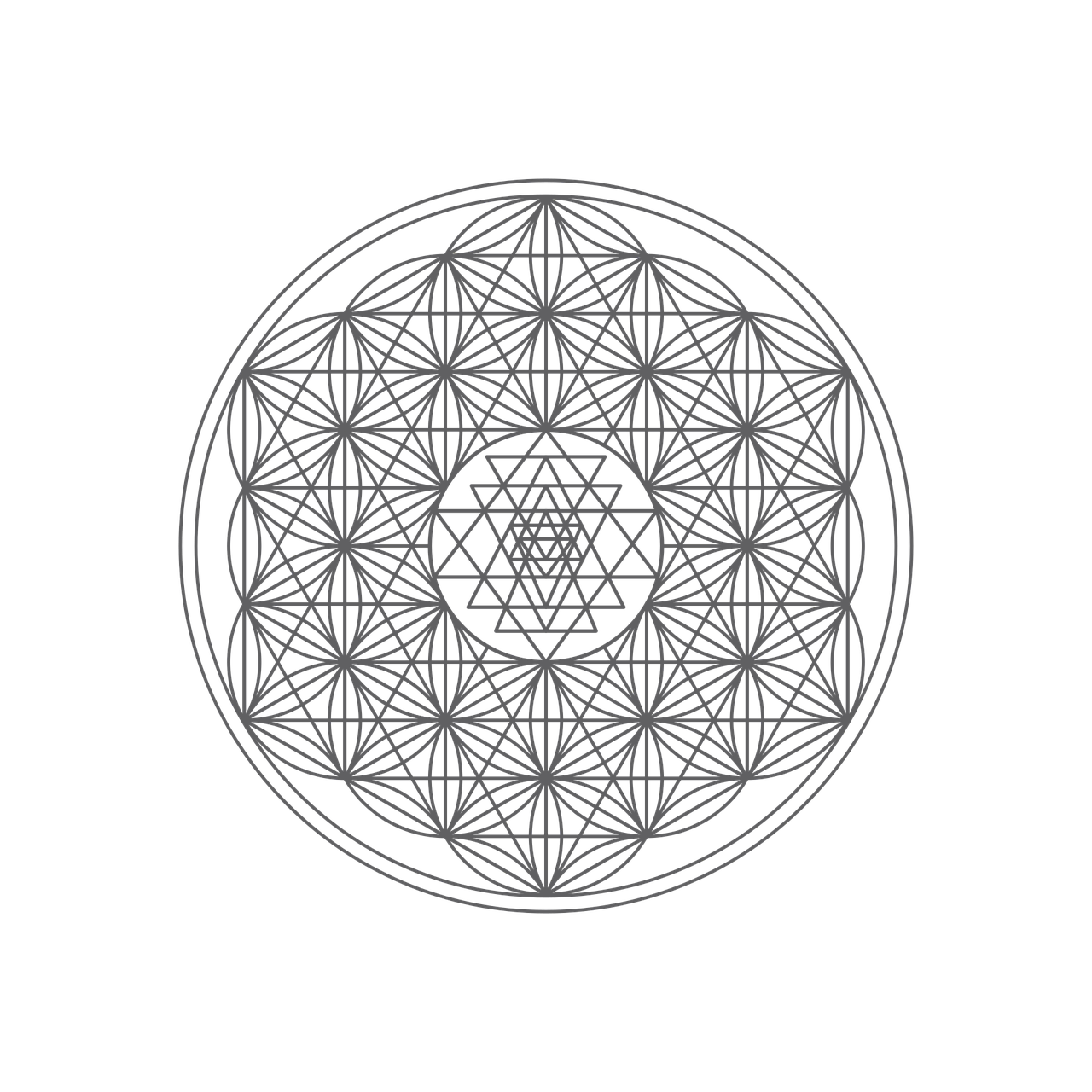 EUGENE, Ore. – Research at numerous Eugene libraries, including the vast collections of UFO materials at the University of Oregon library, finds numerous versions of the “Sri Yantra” symbol that’s featured with this story; while, at the same time, the “watchers” UFO group’s recent meeting at the resort town of Seaside turned up “thousands of Sri Yantra” signatures that have been cropping-up out West and worldwide.

Moreover, the Sri Yantra is believed to be part of the secret UFO files that Julian Assange showed to friends when disclosing the WikiLeaks files that he wanted kept under wraps.

However, it’s the New Agers who’ve known the Sri Yantra as simply a symbol of “global peace and harmony.”

Still, it’s a wonder how this massive version of the Sri Yantra is showing up again after being more or less just something that was used in books and on New Age products for years.

After all, say local UFO “watcher” members, this Sri Yantra that they’ve seen around the region was not discovered until the early 1990’s as a sort of crop circle out in the eastern Oregon desert.

“We’ve seen it written in caulk on the corners of churches in downtown Seattle and Portland. We’ve seen it on paper flyers that someone is distributing around Seaside recently, and we’ve heard that the Sri Yantra is cropping up, literally, just about everywhere worldwide,” says Greg Hainsworth who heads a “watcher task force” that investigates local Oregon coast UFO sightings.

Hainsworth said the “Sri Yantra” is known to “just about everyone who’s interested in UFO’s” here in Oregon, but it may not be known or understood by others.

In brief, the Sri Yantra is similar to an ancient Hindu mediation symbol, “but, we’re told it’s much, much older than any civilization from India,” adds Hainsworth while presenting a recently found copy of this proposed UFO “signature” at a recent “watchers” meeting at Seaside.

The Sri Yantra symbol was first discovered in a remote southeastern part of Oregon known as the Alvord Desert. In a place known as the Mickey Basin, a pilot photographed the Sri Yantra as a quarter-mile-wide pictograph etched into the ground in much the same way UFO crop circles are etched.

The Sri Yantra at the Mickey Basin was first discovered on Aug. 10, 1990, but quickly disappeared and has recently returned in odd places, such as recently showing up on car wideshields as a misty shadow near Stonefield Beach, Bray’s Point and other popular UFO sighting locations along the Oregon coast.

Moreover, the Sri Yantra symbol has been found in the want ads of numerous newspapers up and down the West coast and, more recently, it’s been noted in various communications worldwide both within and outside the UFO community.

“It’s now spotted, as a myserious mistake or typo, in the New York Times, the Washington Post, in major London, German, Spanish and other foreign newspapers as an odd symbol in the corner of advertisements or even on the funny pages,” explains Hainsworth who said some UFO watchers have made it their business to research the symbol and what it means.

The original measurements of the Sri Yantra symbol, that was located along a desert hillside, contains 13.3 miles of lines, ten inches wide and three inches deep.

It’s location in the desert of eastern Oregon is now a “sacred place” for UFO watchers worldwide who still make the journey to the Mikey Basin to be near the site where Sri Yantra was first discovered.