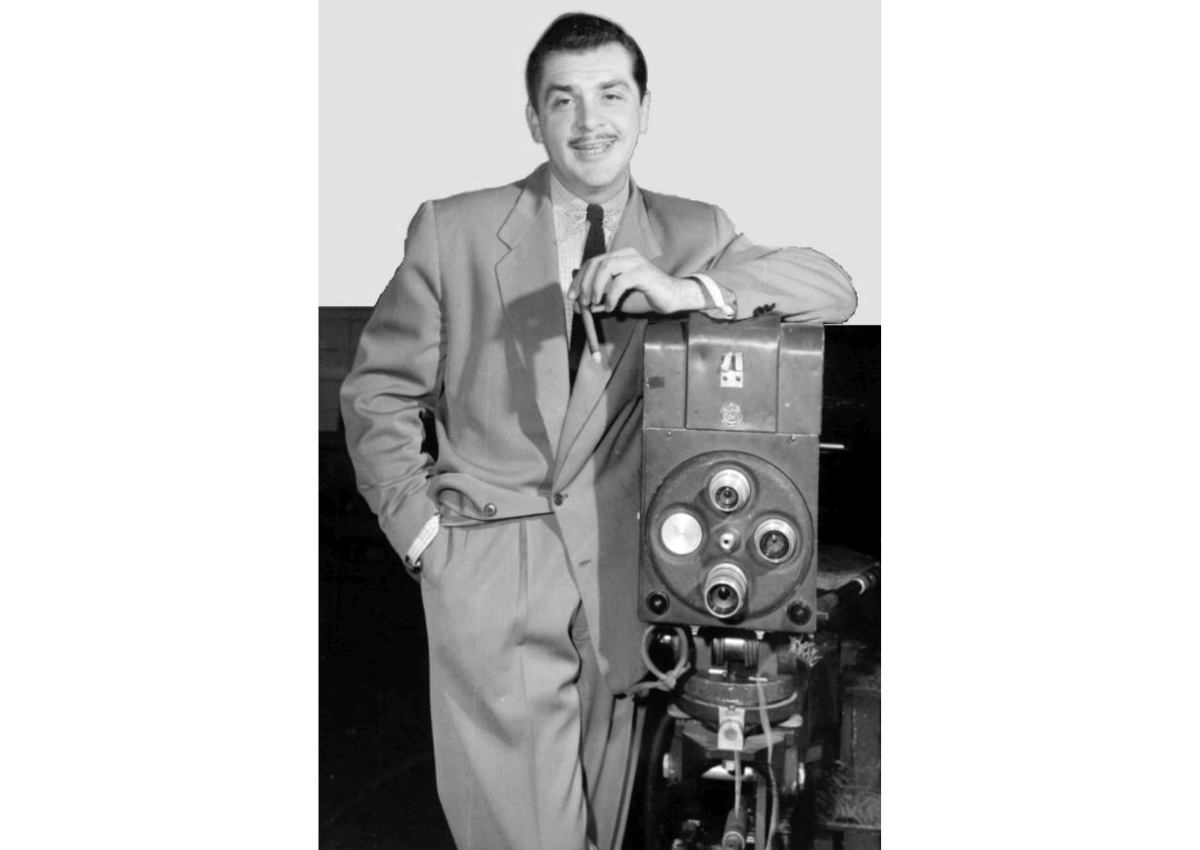 Ernie Kovacs was at the top of his game at age 42 when he was killed in a car crash while driving around Hollywood in the early morning hours of Jan. 13, 1962; Kovacs was considered to be “the coolest guy on the planet,” and his TV shows influenced generations.

His epitaph reads: “Nothing in moderation – We all loved him.” Thus, the death of Ernie Kovacs some 50 years ago still rocks those in American film and television who view Kovacs as one of the greatest American comedians of all time.

It was in the early morning hours of Jan. 13, 1962, that Kovacs, 42, was killed in a car accident while driving home from a baby shower given by Billy Wilder for Milton Berle and his wife, who had recently adopted a three-year-old boy.

Kovacs and his wife, the singer Edie Adams, were driving home separately from the baby shower at about 2 a.m. when “a light southern California rainstorm hit, and Kovacs lost control of his Chevrolet Corvair station wagon while turning fast, and crashed into a power pole at the corner of Beverly Glen and Santa Monica Boulevards,” stated a page one report in all major U.S. newspapers at the time.

Ironically, his daughter – Mia Susan Kovacs – died at the age of 23 on May 8, 1982, when she too was fatally injured after her car ran off the shoulder of a road and crashed in Los Angeles. Miss Kovacs was thrown through the sunroof of her car, a friend of the family said.

At the time of Kovacs death, his close friend and fellow comedian Lucille “Lucy” Ball said, “We lost a real genius.”

Ernie Kovacs Died While Trying To Light His Cigar

At the time of his death — 50 years ago on Jan. 13, 1962 — the fact that “Kovacs may have lost control of his car while trying to light a cigar,” fascinated his fans since Kovacs was as famous for always smoking a cigar as Jack Benny was for playing his violin.

For instance, Hollywood newspapers pointed to a photographer who managed to arrive at Kovacs car crash scene. In turn, image of Kovacs in death appeared in newspapers across the U.S., with “an unlit cigar laying on the pavement inches from his outstretched arm.”

Later, in a documentary about Kovacs’ life, his wife Edie Adams remembered calling the police impatiently when she learned of the car crash. In turn, the documentary noted how a police official cupped his hand over the receiver, saying to a colleague, “It’s Mrs. Kovacs, he’s on his way to the coroner – what should I tell her?” With that, Edie Adams’s fears were confirmed, and she became inconsolable.

Jack Lemmon, who also attended the Berle party, identified Kovacs’ body at the morgue when Adams was too distraught to do so, stated the documentary.

As an example of his fame, Kovacs pallbearers were Lemmon, Frank Sinatra, Dean Martin, Billy Wilder (director of “Some Like it Hot”), Mervyn Leroy and Joe Mikolas.

Also on hand to comfort Edie Adams and other family members of Kovacs — who were Hungarian Americans who immigrated to the U.S. “to make a better life for Ernie” — were the who’s who of Hollywood: George Burns, Groucho Marx, Edward G. Robinson, Kirk Douglas, Jack Benny, James Stewart, Charlton Heston, Buster Keaton and Milton Berle.

At the same time, Kovacs had left instructions – in the event of his death – to keep things simple. Thus, when the pastor paid tribute to Kovacs during the funeral, he summed up his life in two sentences: “I was born in Trenton, N.J. in 1919 to a Hungarian couple. I’ve been smoking cigars ever since.”

Kovacs’ uninhibited, often ad-libbed, and visually experimental comedic style is credited with influencing numerous TV comedy programs for years after his death in an automobile accident.

Back in April — in a tribute for this 50th anniversary year of Kovacs death — the media critic Jeff Edelstein reported on twitter.com that “for many people – from Keith Olbermann to Conan O’Brien to David Letterman – the above word is more than just the name of a long-dead television star.

Nope. For these people and more, the name is a touchstone, for without Ernie Kovacs, TV as we know it today – from ‘Saturday Night Live’ to ‘The Simpsons,’ from ‘Jackass’ to ‘Monty Python’s Flying Circus’ would simply not exist.”

Edelstein also stated that “Kovacs did things no one did before. He spoke to the camera. He set up drawn-out visual gags. He ad-libbed his way around the set.

And while these quaint little tics are the domain of just about every TV personality today, you must understand this: Kovacs CREATED these things. He is the person responsible. Without Kovacs … well, it’s unclear.”

Kovacs Honored Today As The Best Of The Best

Although Kovacs and his wife Edie Adams received Emmy nominations for best performances in a comedy series in 1957, his talent was not formally recognized until after his death, states his official biography.

Thus, the awards started to role in for Kovacs – some 50 years ago – in 1962 when he won the Emmy for outstanding electronic camera work, and also the Directors’ Guild award came a short time after his January 13 fatal car accident.

Then, some 20 years after his death, Kovacs was inducted into the Academy of Television Arts & Sciences Hall of Fame. Kovacs also has a star on the Hollywood Walk of Fame for his groundbreaking work in TV.

Also, in 1986, the Museum of Television & Radio presented an exhibit of Kovacs’ work, called “The Vision of Ernie Kovacs.” The exhibit promoted the Pulitzer Prize winning TV critics, William Henry III to write for the museum’s booklet:

“Kovacs was more than another wide-eyed, self-ingratiating clown. He was television’s first significant video artist. He was its first surrealist… its most daring and imaginative writer.

He was… television’s first and possibly only auteur. And he was a genius. In commercial terms, a genius is any entertainer… who finds a new way to make money. Kovacs never fit that description.

Kovacs’ genius lay in the realm of art. There, a genius is someone who causes an audience to look at the world in a new way. Ernie Kovacs.”

Armenian Christmas Is Celebrated On January 6