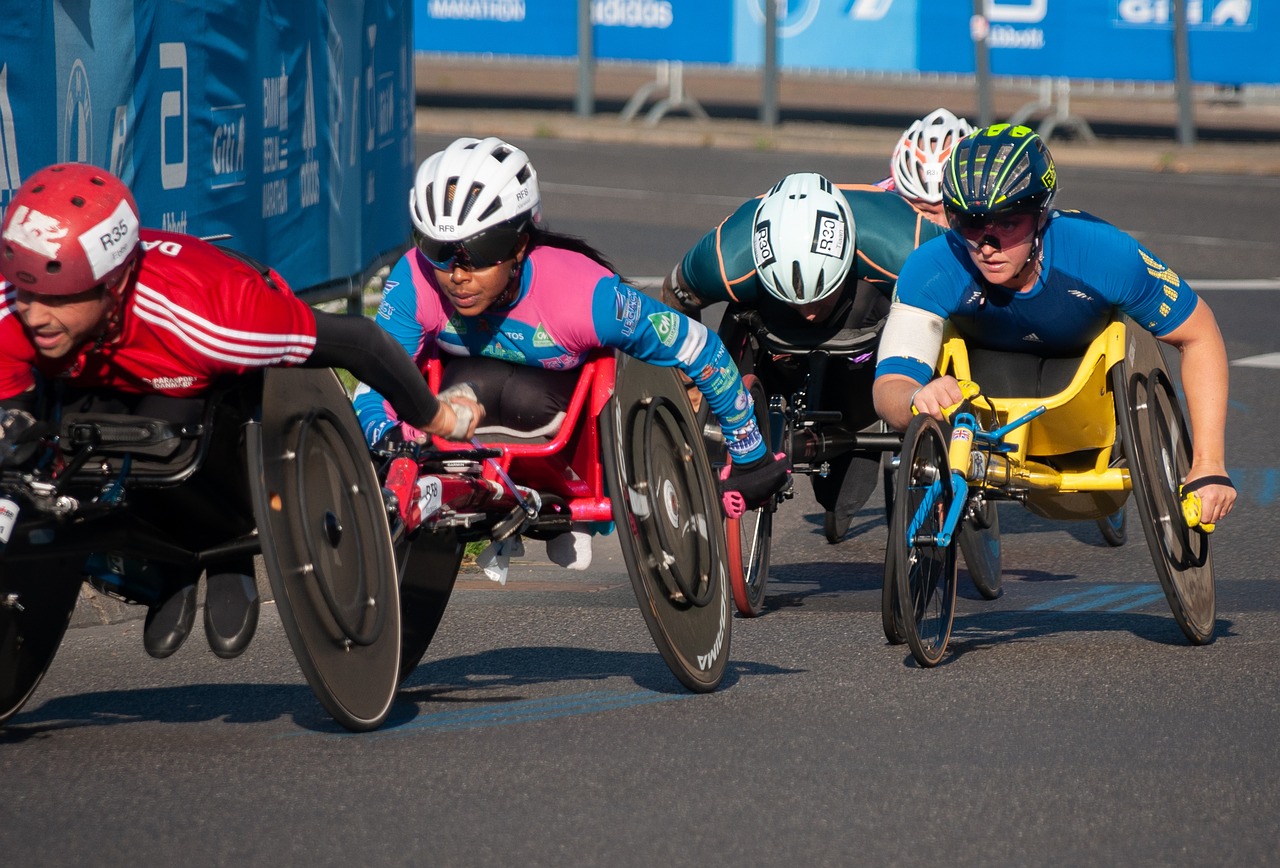 Britain’s David Weir again demonstrated the value of his sprint finish with a hat-trick of victories in the Flora London Elite Wheelchair Marathon. For the whole distance there was a group of seven talented athletes and it was not until the last four hundred and fifty metres that they separated.

From the start the magnificent seven comprising David, the title holder; Kurt Fearnley, the Australian Paralympic champion; Denis Lemeunier from France and the London winner in 2001; South Africans Krige Schabort and Ernst Van Dyk; World Record holder Heinz Frei and American Joshua George were together testing and looking at each other to assess fitness.

As they entered The Mall there was an explosion of speed and David Weir had more of it than the others and showed us all why he loves the London course to win his third title in succession and fourth in all. None of the other protagonists could compete with the dynamic David whose finishing time was 1hr 33mins56secs.

Kurt Fearnley was second as he was last year, four seconds adrift after overcoming a wheel entanglement with the Japanese Choke Yasuoka at the Cutty Sark. He was followed by Denis Lemeunier and London debutant South African Krige Schabort. In fifth place came the Swiss Heinz Frei. These five were separated by only seven seconds.

Unfortunately Ernst Van Dyk and Joshua George came too close for comfort as their wheels clashed with only one hundred metres left and ended up crashing into the hoardings around the spectators stand. Both were very disappointed as they had chances of medals. George’s chair was damaged in the confrontation but both athletes recovered to finish sixth and seventh.

After the race David reflected “I knew it would be tough and I tried to pull away a few times. I tried to use the hill to my advantage but the head wind was too strong. I know I’ve got a good sprint finish, so I just stayed with them and got them all in the end.”

His performance today showed he had recovered from the glandular fever which laid him low for a couple of months around Christmas. He said he felt he his form was good after winning the recent Lisbon Half Marathon, only eight seconds outside the world record.

The defeated Fearnley was philosophical in his words after the race. “A bit of a disaster really! I had a bit of a crash at 10km and a flat tyre at 20km. I’m very glad that the group went for a tactical race because with those problems I would have never been able to keep up with the pace. Hopefully, next time it will be different. That’s the way wheelchair racing goes sometimes.”

Britains promising youngster Brian Alldis took eighth spot with a personal best time of 1hr37mins23secs. He will be hoping this will be good enough for selection for the Paralympics.

Sandra Graf of Switzerland making her London debut enhanced her growing reputation as a marathon racer by creating a procession in the women’s race. In the process she broke the course record previously held by Swede Monica Wetterstrom since 1997. Graf’s winning time of 1hr48mins04secs improved the record by a margin of just over a minute.

Up to five kilometres Graf, the American Amanda McGrory, the title holder Britain’s Shelly Woods and four times winner Italian Francesca Porcellato were together. Then the race started and by ten kilometres Porcellato had dropped off the pace with Amanda McGrory just in the lead.

By fifteen kilometres Sandra was twenty one seconds ahead of Shelly Woods with Amanda a further six seconds adrift. Then Graf accelerated and pulled away leaving the others in her wake, increasing her lead to be almost four minutes ahead of the American at the end.

After the race Shelly explained “I was feeling good today for quick time but got a puncture at three miles. This made it very hard to hold on to the others and I couldn’t change the tyre until twenty miles. I anticipate racing against Sandra and Amanda in Switzerland soon and hope I don’t puncture then.” Shelly’s bronze medal time was 2hrs1min59secs- her slowest London since 2006.

After the race Sandra said “It was a slow start which I liked but at 10km I decided to go faster. After a while, I decided to go on my own because it was very windy. At the end I was just happy to win.”

Today’s race will be remembered for the closest contest on record with seven athletes in the finishing straight together.

Hotmail Down On East Coast