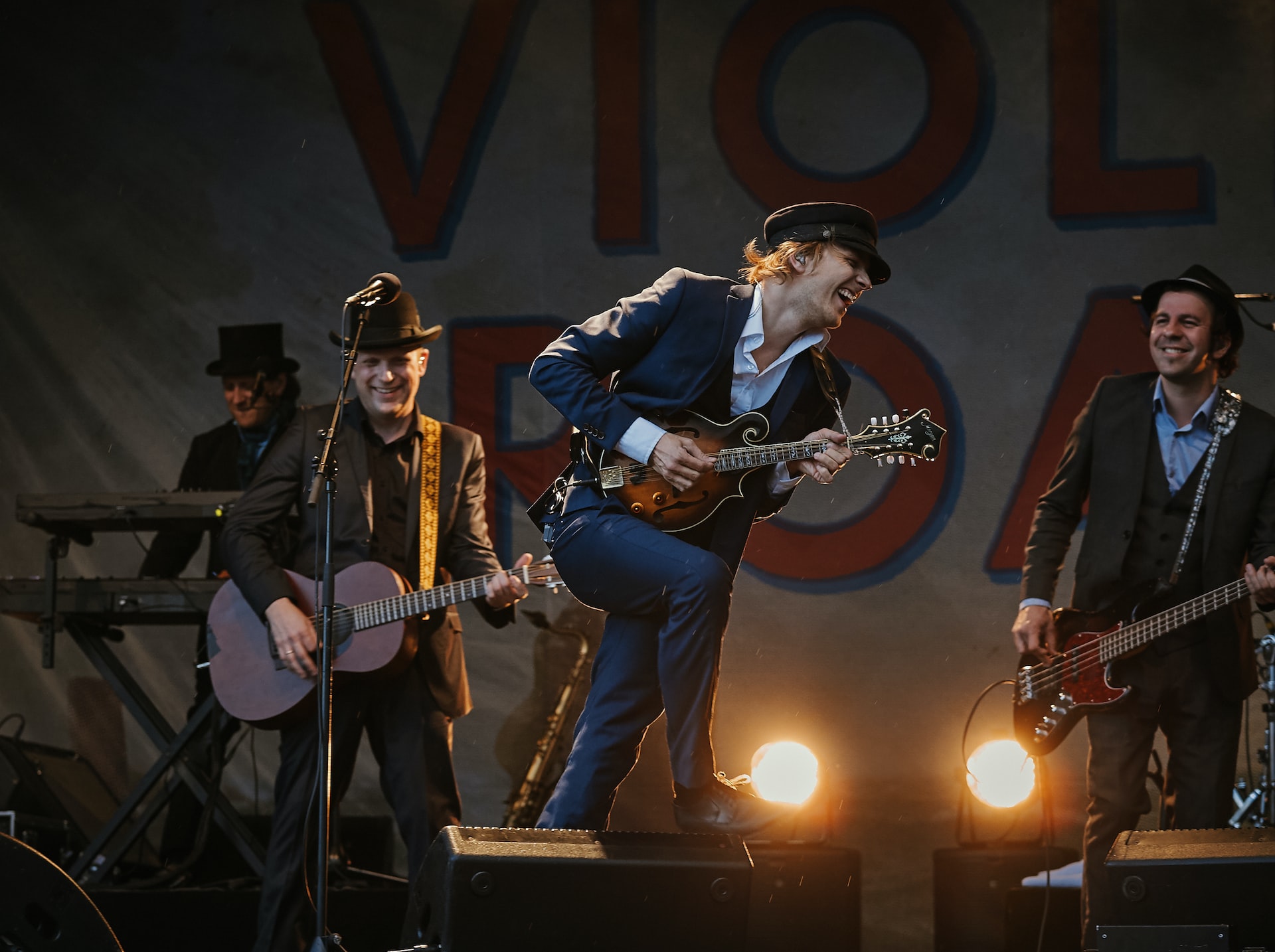 “Deerhoof is one of the most original rock bands to have come along in the last decade.” —New York Times

Rooted in the traditions of old-time and bluegrass, but playing with a distinctive modern edge, The Moss Piglets present original material and classics with multi-part harmonies and utterly unplugged acoustic instrumentation, including clawhammer banjo, mandolin, melodica, guitar, and standup bass.

Deerhoof was formed in 1994 by Rob Fisk and Greg Saunier. At the time, both were members of the band Nitre Pit and would meet before practice to work on their own material, with Fisk playing bass and Saunier on drums.

The two played at the Yo Yo A Go-Go festival in Olympia, where Kill Rock Stars founder Slim Moon discovered them. In 1995, Kill Rock Stars released the band’s first seven-inch single Return of the Wood M’lady.

Vocalist Matsuzaki joined the band in 1996. Her first experience with the band was singing into a strange microphone Fisk had constructed out of paper mache and walkman headphones. Like most members in the history of Deerhoof, she had no formal music training (Saunier went to the Oberlin Conservatory of Music.)

In 1997, the trio released their first LP, The Man, the King, the Girl, on Kill Rock Stars/5 Rue Christine (a new label Moon founded), with liner notes simply identifying the members as The Man (bass, guitar), The King (drums), and The Girl (vocals).

The album was an unusual mix of harsh noise and catchy melodies, played in a wild improvisational style, and produced using a wide and bizarre sound palette. For their next album, Matsuzaki began to play bass and the band added Kelly Goode on keyboard.

In 1999, that lineup released Holdypaws, an album that focused on extremely strict performance of tightly composed songs, completely removing any element of noise, improvisation, or unusual instrumentation. All of Deerhoof’s subsequent albums have fallen between the aesthetic extremes posited by these first two.

Later that year, Fisk and Goode left the band. Saunier became interested in the guitar playing of John Dieterich from the band Gorge Trio and invited him to join the band.

With the new lineup, the band recorded several live tracks, which they combined with previous live recordings on the album Koalamagic, released by Dual Plover in 2000. In 2001, they released Halfbird, an album started four years prior, on Menlo Park. The band then began recording new material and did two tours with XBXRX.

Deerhoof’s next release, Reveille (2002) defined the sound of modern Deerhoof with more integration of melody and dissonance and Matsuzaki no longer screaming vocals, her delivery becoming more confident and smooth.

By the end of the recording process, the band had developed a close relationship with Chris Cohen, then with The Curtains, who joined the band as a second guitarist.

Now a quartet, Deerhoof recorded their next album, Apple O’ in one nine-hour session. Although it was very well received at the time, Apple O’ is often overlooked when reviewers recount the band’s history.

The addition of Cohen allowed the band to expand further on their seamless integration of vocal and guitar melodies and also feature less overdubs than its predecessor. Lyrically, Apple O’ is a concept album about Adam and Eve, and about love in general.

Unlike Milk Man, however, the vague and poetic lyrics form an album that is extremely consistent despite stylistic differences between songs. Around this time, the band decided to quit their jobs and make Deerhoof a fulltime job.

At the time, Saunier was a filing clerk, Matsuzaki was editing a San Francisco Japanese magazine, Dieterich was doing data entry at a law firm, and Cohen was a waiter at a Thai restaurant.

In 2004, the band members left their “day” jobs to devote full time to the band. Maintaining an album-a-year pace, they released Milk Man with each part recorded separately on a computer.

Milk Man is based on a character created by Japanese artist Ken Kagami, a friend of the band. The band creates a story to explain the strange character, which lyrically plays out in a relatively coherent narrative.

In 2005, the band released an EP in Japan on Toad Records, titled Green Cosmos, originally intended to be a split with 54-71, who Deerhoof toured with in Japan. The EP was released in the U.S. as well on Menlo Park. With the exception of a live favorite Come See The Duck, all lyrics on the EP are sung in Japanese.

Next came The Runners Four, recorded on Pro Tools and mixed collectively by the band. The album was widely considered by fans and the press to be Deerhoof’s best work. Many positive reviews, including one in The New York Times, further increased the band’s popularity.

In May 2006, Cohen left Deerhoof to work on The Curtains full time. The split was amicable and the band released an untitled nine-song EP available free on their Web site to commemorate the departure.

In January 2007, Deerhoof released Friend Opportunity on Kill Rock Stars/5RC. Recorded in Dieterich’s bedroom with some overdubbing done at Tiny Telephone with Jay and Ian Pellicci. Deerhoof is also currently working with composer Ed Shearmer on the soundtrack to the upcoming film Dedication.

Deerhoof has toured with such bands as The Roots, Radiohead, The Flaming Lips, Wilco, and Sonic Youth. When not on the road, Saunier and Matsuzaki live in San Francisco while Dieterich lives in Oakland.

In addition to Deerhoof all members have played in many other bands, including The Curtains, Xiu Xiu, THETEETHE, Gorge Trio, Natural Dreamers, and Retrievers. Saunier has teamed up with Hella drummer Zach Hill and Joanna Newsom to create Nervous Cop. The band also recorded a few tracks with Danielson for their album Ships. — www.walkerart.org