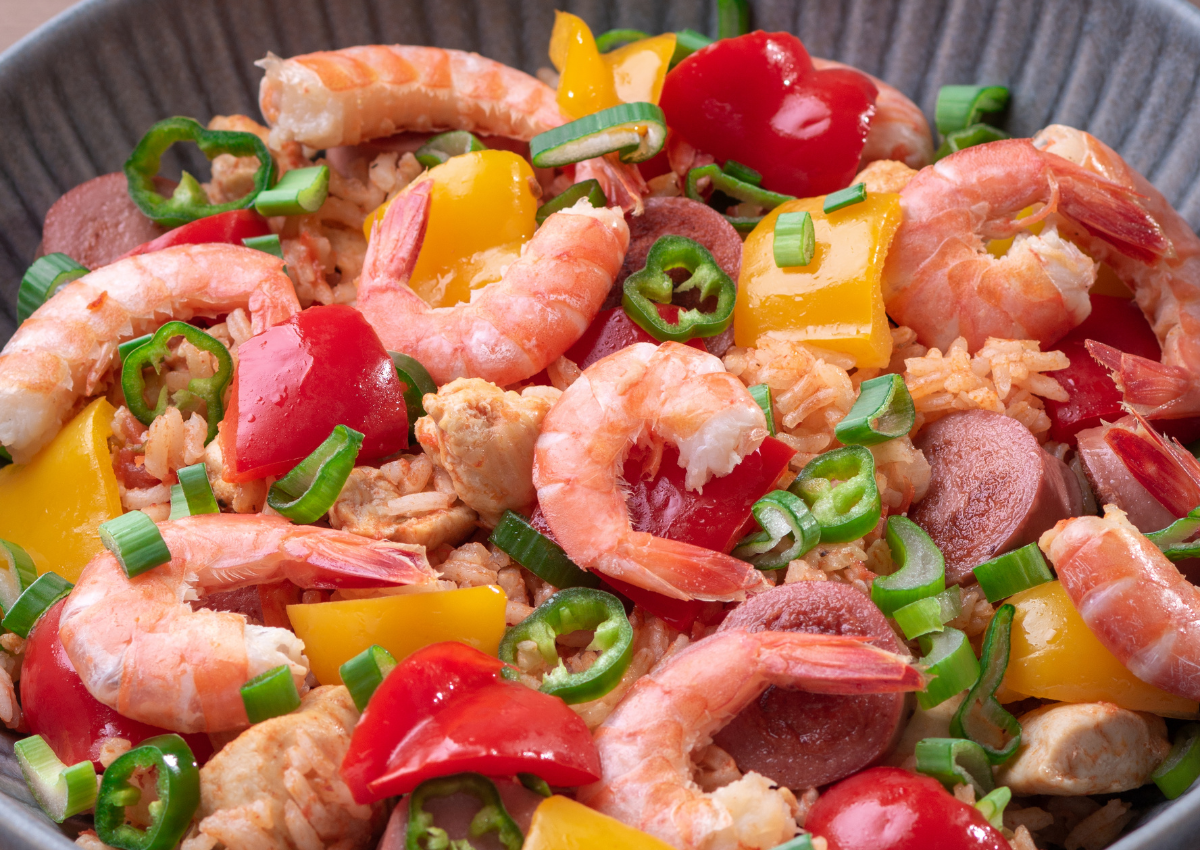 “Duck Dynasty” made a triumphant return to television this week and Miss Kay was in her usual spot in the kitchen cooking Jambalaya, but how does she make it?

“Duck Dynasty” has become one of the most popular shows on television. In fact, in its Season 3 premiere this week, it tied “American Idol” in the key 18-49 year-olds demographic (with a 3.9 rating) and garnered 8.6 million viewers (according to Nielsen), tops for the night in its time slot on cable.

It set a network record for A&E TV for viewership. And part of that success is the recipe of family, food, and fun that is a part of every episode of “Duck Dynasty.” And in speaking of the latter, Miss Kay Robertson, matriarch of the bearded clan, was busy with a large pot of Jambalaya.

Of course, we’re to understand that it is Miss Kay’s “world famous” Jambalaya. (All of Miss Kay’s kitchen creations are “world famous,” don’t ya know?) However, the recipe is not to be found.

It’s not online anywhere. It isn’t with Miss Kay’s recipes on the AETV.com site, which shows recipes for banana pudding, Swiss steak, and Quick Biscuits. And it isn’t with the “Duck Dynasty” book excerpt recipes, which highlights Garlic Frog Legs, Duck Wraps, and Beans and Rice.

Now, Jambalaya is an old Cajun dish that is centered around rice and incorporates various meats and spices. It can contain either, altogether or separately, shrimp, oysters, pork, beef, ham, and chicken. According to Kitchen Project, it was created where food was scarce and appears to be a spicy collective potluck.

It is believed to be a derivative of the Spanish dish Paella, which has also been Americanized into Spanish Rice. Jambalaya itself is a word thought to be derived from the French jambon (ham) and the African word aya (rice).

Enough about the history. What goes into a good Jambalaya? Apparently any or all of the meats mentioned above, plus onions, bell peppers, garlic, celery, cayenne and black pepper, bay, Worcestershire, anything else you got in the kitchen that’s hot and spicy, and green onions for a garnish.

Here’s a recipe without seafood from Cooking.com…

Take 2 tablespoons of Creole Seasoning and sprinkle over beef, chicken, and pork. Melt butter in large Dutch Oven pot. Add meat to butter and cook until brown (about 10 minutes). Add andouille sausage and cook until brown (about 5 minutes). Then transfer meats (a slotted spoon is best) and sausage to large bowl and set aside. All accumulated should be in or returned to the pot.

Take sidelined meats and sausage and return them to the pot. Add in rice and stir thoroughly. Add water and bring mixture to boil, stirring occasionally (prevents rice from sticking). Simmer; stir occasionally. Liquid will be absorbed within about 15 minutes. Remove pot from heat. Let rest until rice is tender (just another 3 minutes or so). Remove and discard bay leaves. Season Jambalaya to taste using salt, black pepper and hot pepper sauce. Fold in green onions.

This batch of Jambalaya will take about 55 minutes to cook and will make 8 large servings.

That’s a traditional Cajun-style Jambalaya. But if you want an easier, less spicy, recipe, check out Mom’s Jambalaya at Cooking.com, which was posted by, of all posters, “Kay,” who says the recipe came from a guy who wins the Jambalaya cooking contest every year in Gonzalez, Louisiana, which is known as the Jambalaya Capital of the World.

AllRecipes.com has an “Easy” recipe with Worcestershire and Kielbasa sausage (instead of andouille). And there’s a Simple Jambalaya at Cooking.com that contains shrimp.

We might not know exactly what is in Miss Kay’s “world famous” Jambalaya she cooks up for the Robertson clan in West Monroe, La. (which is a little less than 250 miles north of Gonzalez), but we can get pretty close.

The Battle Of The Iron Grandmas Meatloaf Edition On The Chew